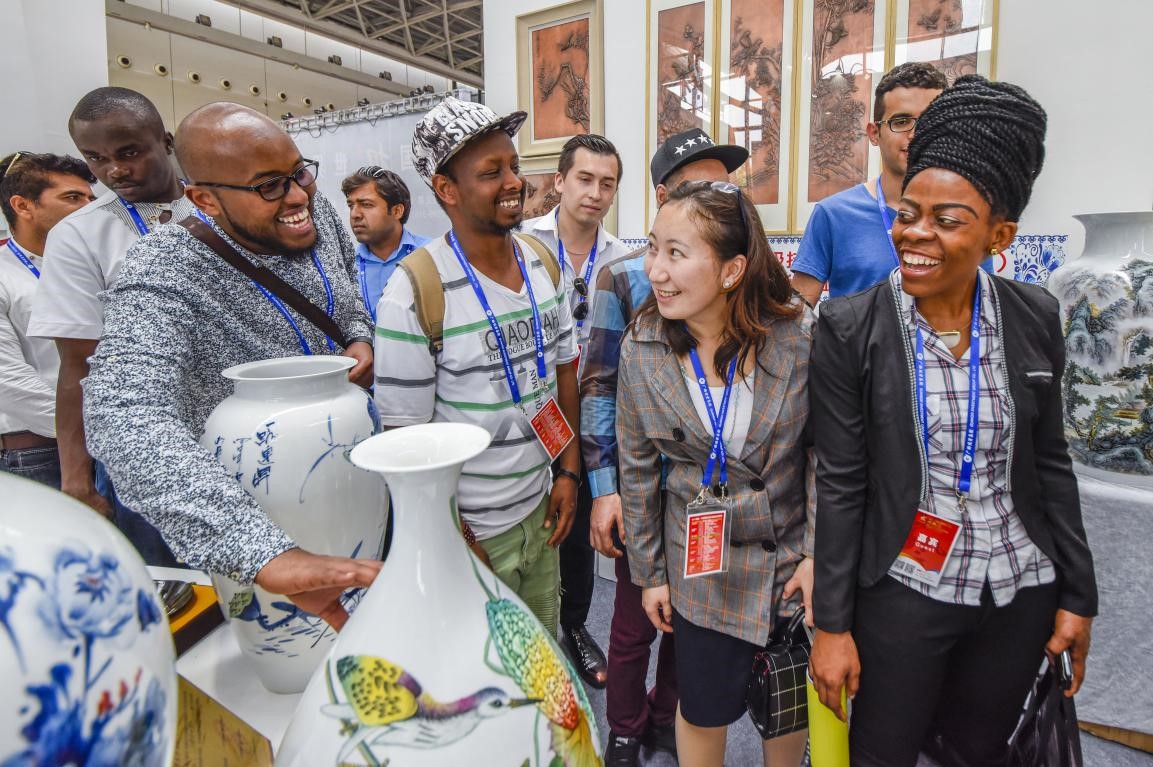 On April 13th, 2017 China – ASEAN Expo Cultural Exhibition was opened in Nanning, Guangxi. The exhibition revolves around the theme of “Building the 21st Century Maritime Silk Road and Promoting China-ASEAN people-to-people bonds”. It has become a platform of cultural exchanges between China and ASEAN. Photo : Xinhua News Agency. The people-to-people bonds among the Belt and Road countries in terms of academic, educational and cultural exchanges have been tightened since the initiative was put forward by China, authority departments disclosed at a press conference held by China’s State Council Information Office on Thursday. On the conference, Publicity Department of the CPC Central Committee, Ministry of Education, Ministry of Culture, State Administration of Press, Publication, Radio, Film and Television, and China Center for International Economic Exchanges (CCIEE) briefed on the progress made on improving the people-to-people bonds among the en-route countries. The “Belt and Road” initiative has received active response from domestic and overseas academic circle since its proposal, said Tuo Zhen, vice minister of the Publicity Department of the CPC Central Committee.

Incomplete statistics showed that 300 research platforms for the “Belt and Road” initiative have been established by Chinese scientific institutions and higher educational institutions, and more than 50 famous overseas think tanks have carried out studies on the initiative. A batch of research results have been published, including 400 Belt and Road books composed by Chinese think tanks and more than 100 study reports issued by overseas think tanks, Tuo added. A parallel thematic meeting themed with “think-tank communication” will be arranged during the two-day Belt and Road Forum for International Cooperation to be kicked off on Sunday, Executive Deputy Director of the CCIEE Zhang Xiaoqiang said. He elaborated that during the meeting, experts will reach a consensus on building a colorful Silk Road after their discussion on how to better play the role of think tanks to promote the Belt and Road cooperation.

The Ministry of Education has put more efforts to cultivate envoys that intensify the people-to-people bonds between China and Belt and Road countries by stepping up its overseas study plan, said Vice Minister Tian Xuejun. The education authority has established Silk Road Scholarship, a scholarship program funded by Chinese government to support 10,000 students from countries along the proposed routes every year, he furthered. Vice Minister of Culture Ding Wei introduced that by enhancing governmental cooperation, the ministry has signed inter-governmental agreements on cultural communication with all of the 60-plus countries along the “Belt and Road”. China will also invite 800 famous think tank scholars, sinologists and translators to China for exchange and study, Ding said, adding that 150 young people will be trained to become talents for heritage restoration and museum management. The State Administration of Press, Publication, Radio, Film and Television has launched 2 projects to promote film, television and book exchanges since 2013, deputy director Tong Gang told the press.

He added that the Silk Road International Film Festival was established in 2014, and a total of 57 countries participated in the event last year (Source: People’s Daily).