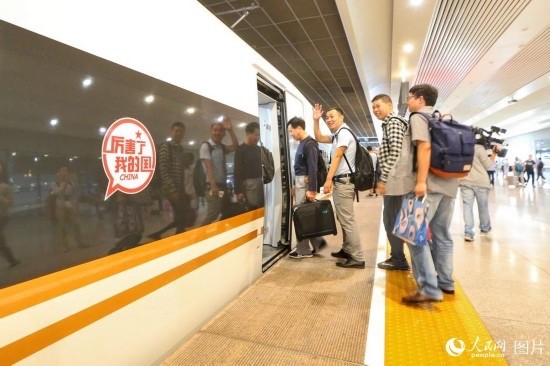 China’s first self-developed Fuxing bullet train, during the past Spring Festival travel rush, became the first choice for passengers in Beijing, Shanghai, Nanjing and Guangzhou owing to its fast, smooth and comfortable traveling experience. The secrets behind its outstanding performance are the world-class technologies independently developed by Chinese engineers.  Years ago, it took a whole day to travel from Beijing to Shanghai on a train that runs about 100 kilometers per hour, recalled Kang Shunxing, vice director of ticket office at Beijing South Station. Since the “Fuxing” and some other high-speed trains started operation, passengers have been able to make a return trip between the two cities within a day, Kang added. A test made by a passenger on the fast-moving Fuxing train showed that the plastic water bottle placed upside down can stand still though the train runs at the speed of 350 kilometers per hour (kph). 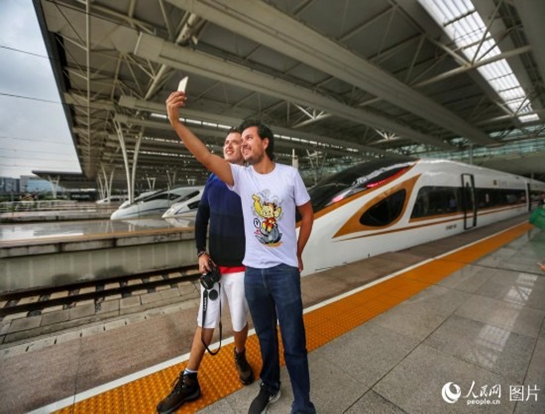 One secret to the fast speed and smooth experience on Fuxing trains lies in the gear case, a core component that can be used for a maximum of 30 years. Each gear in the Fuxing trains can run 24 million kilometers, which equals to the distance of circling around the earth for 600 times. In a factory located in east China’s Jiangsu province that produces gear cases for the Fuxing trains, all the manufacturing and assembling processes are under data control so as to guarantee a high-level accuracy regarding the tightness of bolts. Shaping remains the most important procedure of making a driving wheel, said Lu Yanlong, chief expert of vehicle manufacturing techniques in CRRC Qishuyan Locomotive & Rolling Stock Technology Research Institute. The surface accuracy of gears is required to reach micron order, as small as one fiftieth of a hair, otherwise the meshing between gear teeth and lifetime of wear and tear will be affected, Lu added. 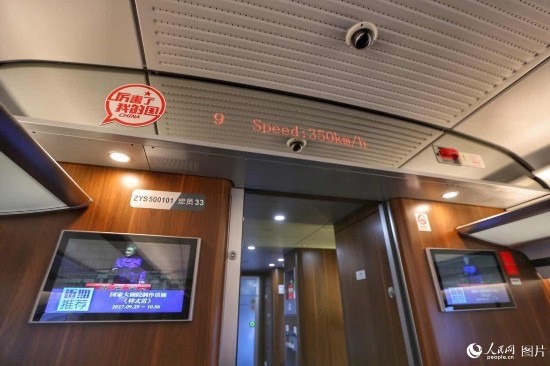 The digital screen inside “Fuxing” shows the train runs at the speed of 350 kilometers per hour. (Photo by Wang Chu from People’s Daily Online)

Fuxing, meaning “rejuvenation” literally, started operation in June, 2017. It’s a flagship China-made product as all the software used in the train was independently developed by Chinese engineers. Some technologies adopted by Fuxing bullet train have been pace-setter in the world. Among the 254 standards of the core technologies used in the trains, up to 84 percent are Chinese-developed ones that are now followed by other countries. By Ji Peijuan from People’s Daily

Pic head line: The first batch of passengers get on the Fuxing bullet train on Sept. 21, 2017 when seven pairs of trains start running between Beijing and Shanghai at the speed of 350 kilometers per hour. (Photo by Wang Chu from People’s Daily Online)