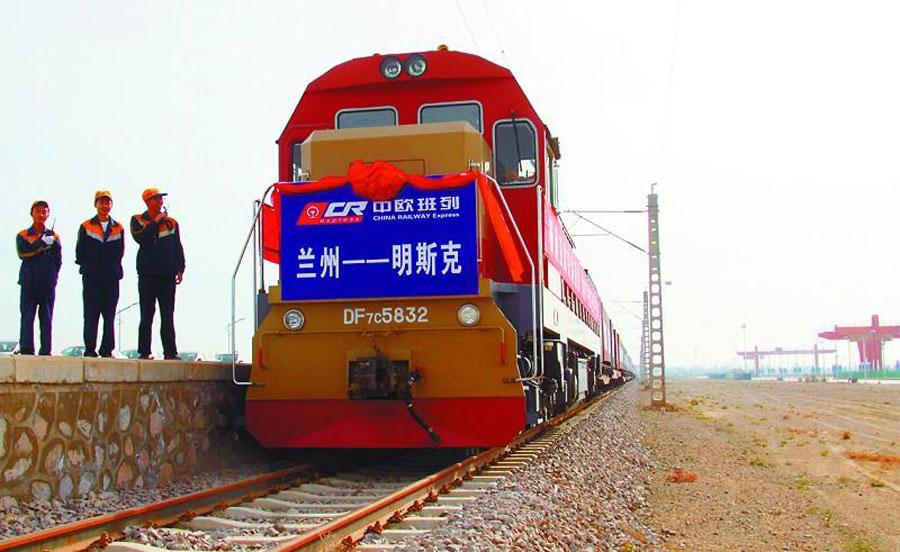 The first freight train from the UK to China which filled with UK-made products will arrive in Yiwu, East China’s Zhejiang Province on Saturday, after finishing its 12,000-kilometer journey. Analysts said that the train has not only injected vitality into China’s trade with the UK and Europe, but also revealed the glimmer of the“Belt and Road” initiative. The train, filled with 32 containers of products, left the London Gateway terminal of Dubai Ports World (DP World) on April 10. The London-Yiwu line recreates the ancient “Silk Road” trade route that once connected Europe to China. “People came all the way to the gateway to witness the historic moment. The cold weather and strong wind did little to dampen the enthusiasm of the public,” Nelson, a security guard at the port, described the moment when the train set off from London. He added that it was touching to see the crowds waving Chinese national flags and good luck banners.

In the two weeks since the train’s departure, many more customers showed interest in the train and consulted about the details, said Oliver Treneman, manager of the gateway’s logistics park. Treneman said that the train has a significant meaning for them as a new way of transportation for manufacturers and retailers based in London. It is faster than sea transportation and cheaper than air freight, he explained, adding that the freight train has offered a new approach for the transnational transportation of British commodities. “We believe it’s just a start and there will be plenty such trains in the future. It trades British goods for firm hard currencies,” said an employee of the London gateway who hailed China as the country on which the UK has placed high expectations after its exit from the EU. The UK, as an island country surrounded by the Atlantic Ocean, heavily relies on exports because of its limited domestic market. The country is expected to have to find new business chances post-Brexit, as the European market currently accounts for over half of British exports. Against this backdrop, the UK political circle reached a consensus to seek benefits from China’s Belt and Road initiative.

An aerial view of the new high-speed rail terminus in Urumqi, which will be operational by the end of this year (Photo Xinhua)

“China-Europe freight trains are the best opportunity for the UK to strengthen its trade with its global partners especially after its exit of the EU,” the BBC said in a report. “The UK’s commodities will reach out to the world along the ancient Silk Road,” said Greg Hands, UK Minister of State for Trade and Investment, adding that the freight train commuting between China and the UK will inspire and accelerate the latter’s globalization process. The Belt and Road initiative will bring Scotch whisky, a symbol of national pride, to the vast Chinese market, and as a result generate tangible benefits, said Shane, an employee with the Scotch Whisky Experience, a whisky visitor attraction based in the UK. “You can image how exciting that will be,” he said, saying that many Chinese residents like the liquor as well.

According to Shane, the Scotch Whisky Experience has made a plan to keep a 5 percent growth for whisky exports from now until 2020. He believes the plan will be realized under the assistance of the Belt and Road initiative. When the outbound freight train that departed from Yiwu finally arrived at Barking Station in London in January, the BBC said that it was amazing for China to reopen the ancient Silk Road with modern technology. Less than three months later, the fully loaded freight train departed London for Yiwu. It has been compared to an unusual Silk Road train by some British media outlets. The Belt and Road initiative is a cure to the consequences of Brexit, and the country will enjoy development, an owner of a pharmacy located in Beak Street of downtown London, told the People’s Daily.

“The arrival of the first China-Europe freight train in London marked the reach of the Belt and Road route to the westernmost tip of Europe, and now it has returned,” remarked a British scholar in an interview with the People’s Daily. The expert added that the train has injected new energy into China-UK and China-Europe trade, and also reflects the great attraction of the Belt and Road initiative (Source: People’s Daily).